How To Triple Your Leads With Relevant Ad Creative 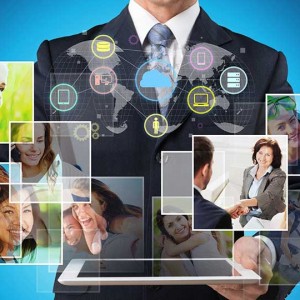 The saying, “a picture is worth a thousand words” is so cliché that most people ignore its importance in internet marketing. However, it’s a vital element to every Facebook campaign that is launched. Ad copy that resonates with the target market of the business, product, or service is also a huge part of ad creative. The process of developing ad creative presents many challenges. We all know that creating dynamic headlines is important, but we have also developed a real appreciation for split testing all variations of ad campaigns.

PPC Boutique creates and manages Facebook campaigns for clients in many industries. In November and December of 2015 we took an in depth look at the ad messaging of one of our clients, who specializes in fitness. We managed to publish ad creative for the client we’re highlighting in this case study that had varying degrees of success (based on split testing and audience research). Here are the stats:

It’s so important to see the ad creative process with new eyes regularly.

Continuously using similar ad copy for Facebook campaigns diminishes the returns those new ads could achieve. It’s also essential that you understand the target market of the product or service the ad is promoting. There’s no way the ad will resonate with the target audience if you don’t know the problems, needs, wants and desires of that target audience.

Ad campaign #2 was an example of an ad that didn’t have a message that clearly spoke to the target market by identifying why clicking the link would help them solve their core concerns. The big difference between Ad campaigns #1, #2 & #3, is that first and third ads spoke about a key concern of fitness entrepreneurs during the end of the year: how to maximize the results their business achieves during their busiest time of the year (January). 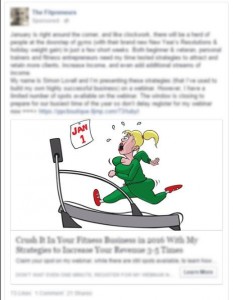 Both Ad campaigns #1 and #3 had a similar message, pointing out how the client can help solve their target markets most urgent problem (preparing their fitness businesses for the influx of new business in the New Year). However, the difference between these two ads was the imagery used.

We must admit there were differing opinions as to what images might work for Ad campaign #1. This campaign was created before Thanksgiving. With the holiday season right around the corner several images were selected depicting people working out with costumes, cartoon people working out on a treadmill, and a stock image of someone stretching with the words “Thanksgiving Workout” on it.

Some of the images that seemed the least likely to do well, within this campaign, were the ones that performed the best. The images including Santa Claus, or other costumed individuals, working out in holiday attire did not do well in this campaign.

We easily could have been led to believe, as you might, that the reason Ad campaign #1 performed better was because of the holiday themed images, however we all would have been wrong. Ad campaign #3 had similar ad copy as #1, the difference was the images used in Ad #3. 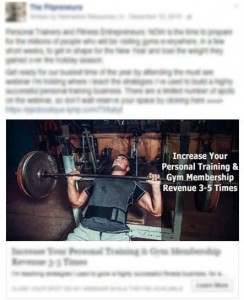 In the end, using ad copy that truly pointed out how the client could help their potential leads solve their pressing problems, and images that resonated with the target audience, we created a successful Facebook ad campaign that outperformed the other 2 ads that were created in dramatic fashion. The numbers speak for themselves!

If you would like professional help with your Facebook campaigns, or want similar results as this client, register for a FREE Strategy Session today. 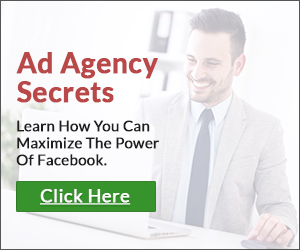 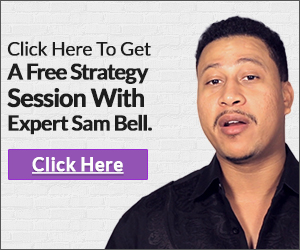 The PPC Boutique was created to specifically address the PPC needs of Information marketers with special focus and expertise on Real Estate and Internet educational products.

Not all PPC campaigns are created equal and knowledge of the campaign’s target market and the inner workings of the target industry as a whole are beneficial for optimal results. The PPC Boutique exclusively services Information marketers where our experience in the industry can provide the largest ROI for our clients.

The PPC Boutique will craft a customized PPC solution to be implemented over Google Adwords, Yahoo and Bing via Microsoft Ad center. Google Adwords is of course is the largest search network but has a major downside with the Google protocols and the dreaded "Google Slap" which results in banned accounts and de-activated campaigns..

PPC Boutique uses a proprietary process for maintaining optimal results while remaining Google compliant. Avoiding the activities that typically result in a Google Ban while also maintaining a high ROI is a delicate process which we have perfected. If your account has already been banned … Read More…